A couple of years ago, I underwent hip surgery at a large Atlanta hospital. During the admissions process, I was asked to sign a consent form. The clerk handed me a single piece of paper with a signature block. In the footer of the page it read, “Page 5 of 8.” I asked the clerk if I could have the other seven pages and with an amused tone she asked me, “Are you a teacher?” “No,” I replied, “why would you ask that?” The clerk chuckled, “Because only the teachers want to read all eight pages.”

As it turned out, I did not read all eight pages. The consent for treatment form was pretty much eight pages of “legalese” virtually indistinguishable from a refrigerator warranty. The document was clearly designed to limit the potential liability of the hospital and not to educate me on anything specific concerning my planned procedure. I did, however, make two changes to the document. Underneath my signature, I wrote a quick description of the planned procedure as well as the surgical site. Being familiar with evidence which suggests that verification of the consent is one of the best mechanisms for preventing wrong-site surgery, I decided that I wanted that information on the consent form in the hope that if the surgical team had the slightest doubt about which hip to operate on, they might reference the consent form.

If this sounds just a little paranoid, your assessment is correct. I’ll admit that even though I have worked in healthcare for well over twenty years, I was nervous. I’d like to think that I was a little less anxious than the patient who doesn’t know how a consent form might be used, but at the end of the day, the prospect of major surgery was a little frightening. 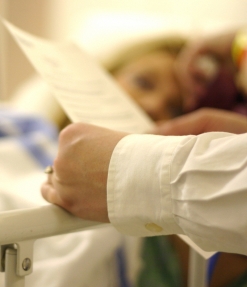 So how might I have felt, if when lying on the stretcher in the preoperative holding area, I had been approached by a young resident, someone who I had never met, asking that I sign a new consent form because the one that I had executed earlier had been lost? Amazingly, that event occurs in hospitals far more than we might expect. Researchers at the Johns Hopkins University School of Medicine recently reported that consent forms were missing for 66 percent of surgical patients. If a resident with a fresh form had sought me out, particularly after I had personalized my consent with procedure-specific details as CMS recommends, a large dose of Valium and antihypertensives would most likely have been added to my pre-surgical meds.

Interestingly enough, if a resident had approached me to re-execute a missing consent, I would not have been the only one distressed by the situation. The Hopkins researchers found that only 47 percent of residents charged with replacing a missing consent document reported that they felt comfortable obtaining consent for major procedures. Even though this last-minute task often fell to residents, 70 percent of the faculty surveyed indicated that patients were probably uneasy with being consented by residents.

Fortunately, the application of technology can virtually eliminate this potential source of anxiety. Ten years ago, the Department of Veterans Affairs implemented an automated informed consent software program that stores signed consent forms directly to the electronic health record – the VA reports that misplaced or lost consent forms have significantly decreased following their adoption of this electronic system. Other healthcare organizations, such as the Los Angeles County Department of Health Services, have reported that the use of computerized tools to electronically generate detailed procedure-specific consent documents allow more time for patient discussion and may potentially enhance safety by reducing the potential for mistakes.

Why else should we care about consent forms? They are a “contract” between patients and hospitals. That is why I made my form specific to what I wanted done – no different from the “work order” that I complete when I drop my car off for service. Maybe a little different – unlike the work order for my car, when consent form “work orders” are not followed, patients may be injured and often fines are incurred. A California hospital recently paid a $75,000 administrative penalty for beginning a procedure on the wrong site – even though the correct surgical site was clearly spelled out on the patient’s consent form. More often than not, the presence of a detailed, procedure-specific consent form helps to avoid medical errors – it is not a document that we can afford to lose.