My father battled cancer several years ago. He lives on the opposite corner of the continent from me and was adamant that he didn’t want his kids to stop their lives to be with him through the fight. He didn’t want to “burden us.” More than that though, I believe he felt — as many of us do — that if his child came to stay with him, the entire scenario would take on even more scariness. He also reasoned — as only a cancer survivor can — that “It’s not a sprint. It’s a marathon. This will take a while…” While I didn’t like it, I agreed and stayed put but I remember the first day of his chemo probably almost as much as he did — and I wasn’t even there.

I remember very vividly worrying about him (of course). Strangely though, I didn’t fear for his life (that had come and gone, mostly) or the pain of the process or nausea or any of the other challenges of chemotherapy. I worried that he’d be lonely. 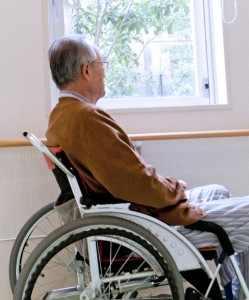 I imagined him sitting in a bed, likely bored and nauseous and probably in some pain. I imagined his sitting there for hours of worry and fear. I called (we all did) often but I know there were treatments when he was sitting in that room completely alone for hours.

At that time, the iPhone was out but just barely and the Android was a gleam in the Google eye. My Dad had a cell phone and even texted a fair bit but none of us had smartphones yet or tablets or easy access to the Web from a hospital room.

Today, I know as a fact that my father would have both an iPhone and an iPad in the room with him every moment he was there. And social media would be in there with him. A held hand cannot be replaced with a post from Facebook or Twitter, or even by an Instagram picture or Vine video. It just can’t. We all want and need physical connection. But if that’s not available, just knowing others are thinking about you via said post, pic or video can mean a lot — never mind actually being able to talk back and forth in a conversation spread over days and/or over a continent.

I admit that this smacks of simple sentimentality. I can argue that we might all need a bit more of that these days, but will cede the facts. So here’s another reason healthcare should embrace social media to stave off loneliness in patients: science! There seem to a large number of research projects looking at this. I’ll share just three examples that I read through.

The first is Dr. Lisa Jaremka from Ohio State University. Her work suggests that lonelier patients have more pain and also have immune systems issues.

Next, we have work from a Dr. Ye Luo’s work. Dr. Luo (from Clemson University) looked at the effects of loneliness in the elderly population. His team looked at a group of 2101 adults, age 50 and over, from the 2002 to 2008. He was able to show a correlation between feelings of loneliness and increased chance of mortality over that time period that was not explained away by other factors.

Lastly (of the ones I researched), Dr. Susan K. Lutgendorf at the Department of Psychology at the University of Iowa looked at 168 Ovarian Cancer patients and found that “adjusting for disease stage, grade, histology, residual disease, and age, greater social attachment was associated with a lower likelihood of death.” Patients with higher levels of social connection lived about 35% longer post-diagnosis.

So let me summarize this scientific work (at least the three cases out of many studies that I read). Lonelier patients:

Now don’t get me wrong. I know that hospitals and cancer centers (etc) already “get this.” Many a hospital or cancer center volunteer has helped many a patient stave off loneliness. But healthcare everywhere is trying to pull in its collective belt and money is tight. It would seem to me that embracing the patients’ existing involvement in social media and even encouraging it, may be a cost-effective way to engage patients and help them stave off loneliness and increase patient satisfaction.

Ideally, healthcare facilities will figure out a way to encourage social network communication and be involved in that conversation. Patients and their families are using social media to talk prior to, during and after the period covered by HCAHPS surveys. By being involved in the social media conversation, the hospital can engage patients and their families throughout the care experience: preparing them prior to their stay, helping them in real-time during their stay and quickly addressing post-discharge questions after the stay.

Unfortunately, the tools required to give hospitals this visibility (without taking away patients’ already familiar tools) are only now starting to be offered and adopted. There is still a hesitance to embrace social media in this real-world, care-giving paradigm (as opposed to just using it to distribute content one-way). But that hesitance won’t last. Transparency in healthcare communications is coming. I look forward to the offerings that will emerge to help hospitals leverage the tools used by patients and families today while also giving those same hospitals a way to be engaged.

Loneliness is a horrible feeling that lots of patients have to deal with every day. By embracing social media communications — even encouraging it — between patients and their families, patients and other patients, etc., hospitals can help battle this problem and add another tool to their care-giving toolbox.

In closing, I will share a quick piece of advice from NPR’s Scott Simon’s mom. Several weeks ago, Simon shared his experiences via Twitter as he watched his mother decline post-surgery, enter the ICU and pass away after only a few days. You can read about it here. Towards the end, his mom shared some advice with him that is especially poignant given the medium of sharing and the message from today’s post: