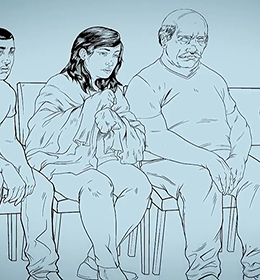 Editor’s note: To recognize the 8th World Sepsis Day—tomorrow, September 13, 2019—Engaging Patients offers an Encore Presentation about the MedStar Health Sepsis Collaborative, which won a Sherman Award in 2018. The Collaborative is a system-wide initiative across 10 hospitals to engage patients and family members in raising awareness of sepsis in the community.

World Sepsis Day is sponsored by the Global Sepsis Alliance, a non-profit charity organization that has enlisted 95 other groups to help increase awareness of sepsis and educate the public about ways to avoid and respond to what it calls a global health crisis, with one death attributed to sepsis every 3.5 seconds across the world.

Through its website, the Alliance offers resources, including social media posts and infographics, to help individuals and organizations to participate in World Sepsis Day.

The MedStar Health Sepsis Collaborative is a comprehensive quality improvement initiative that has uniquely partnered with both sepsis survivors and family members of patients lost to sepsis, through MedStar’s Patient and Family Advisory Council for Quality and Safety (PFACQS). Goals of the collaborative include building a foundation of quality improvement to support our high reliability journey, improving the care of patients with sepsis, executing a regional sepsis public awareness campaign, and most importantly, reducing the number of lives altered or lost to sepsis. The MedStar Health Sepsis Collaborative has engaged with associates and patients across all 10 hospitals in the MedStar system and has supported dissemination of best practices throughout the system. This far-reaching initiative is raising awareness and has begun to decrease the devastating toll of sepsis, both within MedStar and beyond.

This line drawing appears in “Say the words: I suspect sepsis,” an educational video for consumers about the signs and symptoms of sepsis. https://www.medstarhealth.org/mhs/about-medstar/quality-and-patient-safety/sepsis-prevention-education/. Drawing used with permission from MedStar Health.

Sepsis is a leading cause of death in this country, causing more deaths than breast cancer, prostate cancer, and AIDS combined (CDC, 2017). More than 1.5 million Americans get sepsis each year and about 250,000 die from it. It is startling, then, that most people don’t know about sepsis. In fact, one recent survey found that fewer than a third of people could identify the common signs and symptoms of sepsis, which can be critical for getting patients the care that they need to survive (Sepsis Alliance, 2016). Additionally, national data suggest that fewer than half of patients with severe sepsis are receiving all elements of the Severe Sepsis three- and six-hour resuscitation care bundles, as detailed in the 2016 International Guidelines for Management of Sepsis and Septic Shock. These data present a compelling call to engage both our community and our clinicians in the battle against sepsis.

The MedStar Health Sepsis Collaborative kicked off in January 2017. Patients and family members have been the driving force, and their voices, passion, dedication, and creativity have given vitality to the program.

From the beginning, MedStar PFACQS leaders identified the need to educate the public about sepsis. They set a priority on raising awareness of the symptoms and the need for urgency in seeking immediate treatment, since 80 percent of sepsis cases begin at home. Working collaboratively with MedStar physicians, the PFACQS members developed educational materials that are being distributed throughout the region, within and beyond MedStar Health entities.

As part of this effort, two PFACQS members, Armando Nahum, the lead member of the Sepsis Collaborative and Lt. Col. Steven Coffee, of MedStar Georgetown University Hospital, courageously allowed their stories of how sepsis had affected their families to be videotaped and shared with clinicians across the MedStar system and the general public, through social media. By making sepsis tangible and personal, their stories accelerated practice changes and have been integrated into orientation for medical residents in the MedStar graduate medical education program, which is among the largest in the United States. Currently, the focus is on improving emergency department triage processes for recognizing and initiating earlier treatment for patients who are exhibiting sepsis symptoms. The voice of the patient and family member is represented by Nahum, who participates in every improvement team meeting.

The MedStar collaborative developed a system-wide sepsis advisory group, which includes physicians and nurses from each entity, along with associated clinicians from lab and pharmacy, as well as a PFACQS member. This advisory group worked with entity-based improvement teams and PFACQS groups, including face to face meetings, grand rounds, and community events to increase awareness. The culmination of this journey was a system-wide Sepsis Day, on Nov.6, 2017, which marked a new level of transparency and collaborative practice improvement. This event opened with patient voices and stories that set the stage for the event, during which teams from each hospital came together to share and learn from their improvement efforts. Consistent with the focus on educating the public, the collaborative team also led a social media campaign during the 2017 National Sepsis Awareness Month, September, and has deployed posters, brochures, and videos throughout the closed circuit televisions in the system.

Results of this initiative can be reported in three categories: organizational quality improvement, the sepsis public awareness campaign, and care outcomes.

The sepsis public awareness effort has involved both distribution of printed materials (posters, brochures) and use of social media. We are currently assessing how many brochures were initially distributed, and how widely, across our region. Recently, the MedStar Visiting Nurses Association began including the brochure in every new patient orientation package (reaching approximately 3,000 patients to date). The initial social media campaign engaged 115,381 individuals and received a total of 18,470 post engagement comments, almost triple what was estimated. These results reveal the strength of engaging patients in the MedStar Health Sepsis Collaborative.

Efforts are also having an effect on care outcomes. Between October 2016 and October 2017 MedStar’s rate of compliance with national standards for sepsis treatment improved by 20 percent. Simultaneously the observed-to-expected sepsis mortality index decreased from 1.26 to 1.17.

The effectiveness of the MedStar Health Sepsis Collaborative is, in large part, due to the amplification of patient voices that serve as a constant reminder to associates why sepsis improvement is critical. This initiative has now expanded beyond the MedStar service area and is impacting sepsis care at the state and national level.

Working with another PFACQS member and a sepsis survivor, Cheryl Douglass, and her husband, MedStar sponsored legislation in the Maryland General Assembly to establish a task force to develop a statewide sepsis awareness campaign. A member of the MedStar sepsis collaborative provided testimony at the legislative hearings, and the bill was passed in March 2018.

The MedStar experience in engaging patients has also been shared nationwide through CMS’ Hospital Improvement Innovation Network, and the MedStar PFACQS is represented on CMS’ regional continuum of care provider meetings.