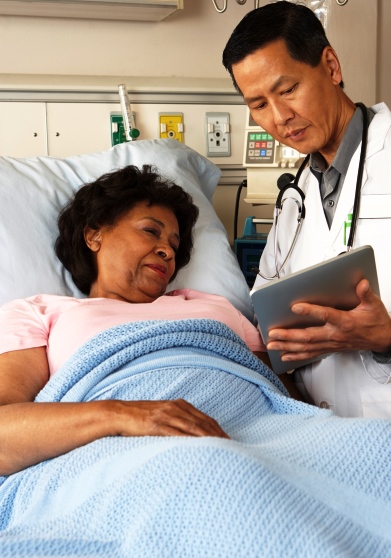 Stereotyping? Not at all. The scenario above is based upon a national sample of seniors who responded to the 2014 Medicare Fee-for-Service Consumer Assessment of Healthcare Providers and Systems (M-CAHPS) survey.

Patient engagement is often hard to quantify. But just as the process of finding a compatible romantic partner is becoming data driven, so, too, is our understanding of patient satisfaction. Research on the impact of race, ethnicity and income on patient engagement that was presented at the recent annual meeting of AcademyHealth illustrated the point. 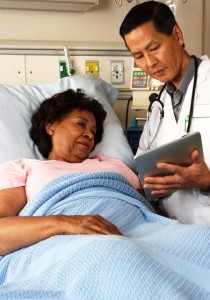 For example, an analysis of the M-CAHPS survey, led by RAND Corp.’s Joshua Mallett, used a linear regression model to examine the effects of socioeconomic status, race and ethnicity while controlling for health status and age. Overall, one fifth of Medicare beneficiaries reported they’d be “unlikely” or “very unlikely” to discuss disagreement with their doctor, and about a third said they’d be unlikely or very unlikely to change doctors if dissatisfied with communication. However, those least likely to speak up or change physicians were the most vulnerable patient population, the researchers concluded; i.e., those who are older, less educated and have less income or fewer assets. Although Hispanics were less likely to disagree and change doctors than non-Hispanic whites, black Medicare beneficiaries were more likely than whites to speak up or change. The implication, according to the researchers: black/white disparities in care aren’t caused by passivity by black patients. Meanwhile, Asian-American patients were the least likely of all to disagree or change doctors when dissatisfied. Why? Amelia Haviland of Carnegie Mellon University, presenting study results, could offer little explanation other than the catch-all of “culture.”

Culture and Expectations Are Central

Culture was also central to an effort to pry apart the complicated question of whether seeing a doctor with the same race, ethnicity and language left patients with a better experience of care. The research, led by Vani Nimbal of the Palo Alto Medical Foundation (PAMF) Research Institute, was a data-driven exercise that included responses from more than 50,000 individuals visiting local outpatient clinics.

“Culture” and “expectations” were offered to explain the eyebrow-raising finding that Hispanics who spoke little English ranked Spanish-speaking, non-Latinos lower than no

n-Latinos who didn’t speak Spanish. Those same Hispanics who spoke little English, however, were more dissatisfied with an ethnically-Hispanic provider who didn’t speak Spanish. Chinese patients, on the other hand, didn’t change their ratings of doctors based on ethnicity or language, perhaps because they didn’t expect to find a Palo Alto provider who spoke Chinese. Asian Indians, meanwhile, rated their doctor visits higher for “communication” when the provider was also an Asian Indian.

Perhaps the real key to the patient engagement puzzle can be found in that old saw, “Money talks.” Anushree Vichare and Tiffany Green of Virginia Commonwealth University, again analyzing a national data sample, concluded that low- to middle-income respondents were much more likely to report that their family doctor listened carefully, explained medical care in an understandable way, showed respect and spent though time with them.

As I wrote on this blog site last year, citing a number of published studies, race and ethnicity do matter in medicine as much as in other sector of our society. Still, while money may not change everything, “green” (as in socio-economic status) may sometimes color patient engagement efforts more than any other factor.

It’s important to note that the research presented hasn’t yet been published, so some open questions may be answered during that review process. However, PAMF’s Nimbal co-authored a published study last fall examining a “culturally relevant exercise intervention” for South Asian women with type 2 diabetes. (South Asian was defined as Indians, Pakistanis, Bangladeshis, Sri Lankans, Nepalese and Bhutanese – just your typical Northern California neighborhood.) That “exercise intervention” involved offering the women one hour of Bollywood dance classes twice a week. (A few years earlier, other research examined “culturally-specific dance to reduce obesity in African-American women.”)

The bottom line of boogying to Bollywood? Those who attended at least 10 of the 16 dance classes showed “a statistically significant reduction in weight.” The classes were conducted by “the lead Bollywood instructor at the community center,” the research team wrote, but a quick Web search uncovered this Bollywood dance workout video with more than half a million views.

Patient engagement efforts may be increasingly data driven, but who says they can’t still be fun?