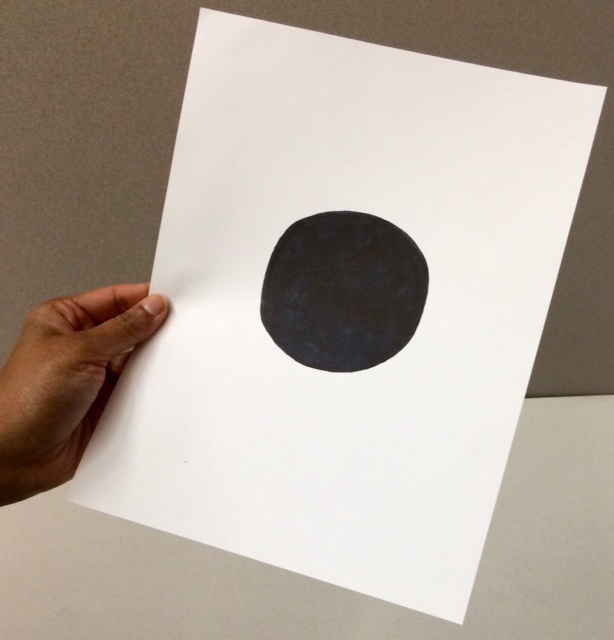 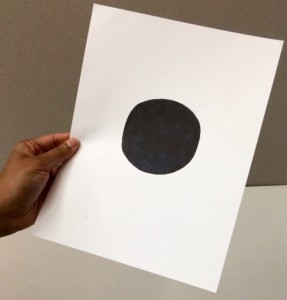 The journey to better outcomes begins by focusing on the whole person.

When you look at this piece of paper, what do you see?

Most people would say a black dot.

But as someone who has experienced a 14-year healthcare journey,I encourage you to take a closer look.

Now what do you see?

As healthcare transforms toward more patient-focused, it’s my hope that you will see the entire sheet of paper.

The paper represents the entire person—the entire patient—the black dot is a diagnosis.

I believe this is where healthcare has failed patients. So much time and energy has been devoted and focused on diagnosing a condition or on pinpointing exactly what is wrong that the overall person has been forgotten. Instead, treatment focuses on eradicating that black dot instead of treating and partnering with the whole person.

Don’t think I woke up one day and had this realization—It has been a long, hard journey to get me to this place. 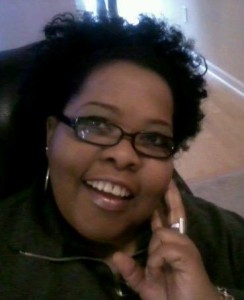 “It was hard to believe that something like being involved in my healthcare truly could improve my outcome in such dramatic ways,” Kim Blanton says.

Two weeks after a complete physical, I came down with the worst cold I ever had. The over-the-counter drugs I used to treat my symptoms did little to provide relief. My primary doctor told me I had the flu not a cold. She prescribed a ZPac and directed me to go to the emergency department (ED) if my temperature peaked again.

By that night, I was in the ED with a three-digit temperature. The attending treated the temperature and told me he heard a heart murmur and referred me to a cardiologist.

At a cardiology appointment a week later, the cardiologist was more concerned about my blood pressure than my heart murmur. My previously normal blood pressure had risen to stroke level. I was given medication and asked to come back the next day for a follow-up appointment. Twenty-four hours later, I still had an extremely elevated blood pressure and was admitted to the hospital. I had more extensive labs and procedures in hope of finding the source of my sporadic change in blood pressure.

The last test performed was an angiograph which required IV contrast dye to be injected into my veins while a special machine allowed the physician to see any clots. The thought was that a clot may have formed between my heart and kidney causing the peak in my blood pressure.

That angiograph almost cost me my life.

Four seconds after the dye was injected, I coded and was defibrillated three times. I ultimately was put on life support. I had experienced an allergic reaction to the contrast dye and was having an anaphylactic shock. The shock damaged my lungs, kidneys, pancreas and ovaries. And I had a stroke.

My family was told at best I might survive the next 10 months. I spent three weeks in the ICU and another week in a step-down unit before being discharged home.

My body and my mind had both taken a real whooping. I looked the same but my energy was sapped. I struggled to remember simple things—like my sisters’ names. My family never left me alone. They organized care for me. I felt like a burden but was so grateful for their presence.

I started preparing to die.

I sold my home and moved closer in the city to make things easier for non-family caretakers to help me. I recorded my obituary and wishes for end of life care. I got a safe and put all the pertinent papers inside.

But I didn’t die. During the next couple of years, I was in and out of the hospital about three to four times a month. I took my meds as prescribed. I did not miss a single appointment. But, I did nothing more.

A High Price for Low Engagement

I didn’t watch for red flags that would indicate I was approaching a crisis. I didn’t pay attention to the changes in my body. I didn’t know how to describe what I was feeling in a way that would help find the cause. I didn’t know my meds or even why I was taking them. I definitely had no concept of my baselines. I did not realize that knowing all of this would help—especially since it should be documented in my records.

Embarrassingly, I was as disengaged as I could be.

One night about midway in this now 14-year journey, I met a nephrology fellow who ignited and activated me. I had been taken to the ED from my home by the EMTs because of a rapid heartbeat. I was given IV drugs in an attempt to regulate my heartbeat. I just could not stop babbling. I thought death had come for me and I was going out talking.

The pack of providers stood silently at the end of my ED bed. They looked at me, then at the monitor, then at me again. They didn’t say anything to me.

One of the providers told the nurse to get “the cart.” I knew exactly what that meant – my heartbeat was getting so fast that I would need to be defibrillated again! I babbled even harder until the nephrology fellow stepped out of the pack and came to the head of my bed. He grabbed my hand, looked me straight in the eye and spoke to me, “We’ve given you drugs to slow you heart down but we need you to calm yourself down.” He repeated this again and held my hand in silence.

Inviting the Patient to Help

It was a turning point in my care and in my life.

That was the first time I can acknowledge being invited to help providers help me. Before that, I just showed up and waited for providers to fix me.

This doctor became my nephrologist and was the pivotal point in my health journey. He would review my labs and paperwork with me while turning the monitor so I could see the data at the same time he saw it. He broke down terms so I could connect the dots between what I was feeling, the meds I was taking, the tests that were ordered and my desired outcomes.

Learning How to Engage

It has been seven years since meeting that nephrologist and changing the course of my journey. Since that first cold, I have had 112 admissions in five different hospitals.

Healthcare professionals will be amazed by how outcomes improve when patients are treated as partners and not viewed as just diagnoses.

The change in my own healthcare has been startling. The numbers are remarkable: Only 30 of my admissions were after I became engaged in my own healthcare. Of those 30, I’ve only had three admissions during the last three years. I have used the tools and techniques that my nephrologist taught me with every provider I interact with.

There is much work to be done to improve the patient-provider relationship in healthcare. I acknowledge that I should have been more engaged in my care but I also wish:

It was hard to believe that something like being involved in my healthcare truly could improve my outcome in such dramatic ways. My journey was draining and costly with many unknowns early on. Today, there’s a minute need for diagnosis because I seek help at the first red flag— which has eliminated many admissions. Without a doubt, patient engagement worked for me. It saved my life!

Fostering an Atmosphere of Engagement

Healthcare providers and organizations must create an atmosphere that encourages engagement between patients and families and providers as well as between physicians and nursing. There is proof in my story—engagement empowered my health journey and improved my outcomes.