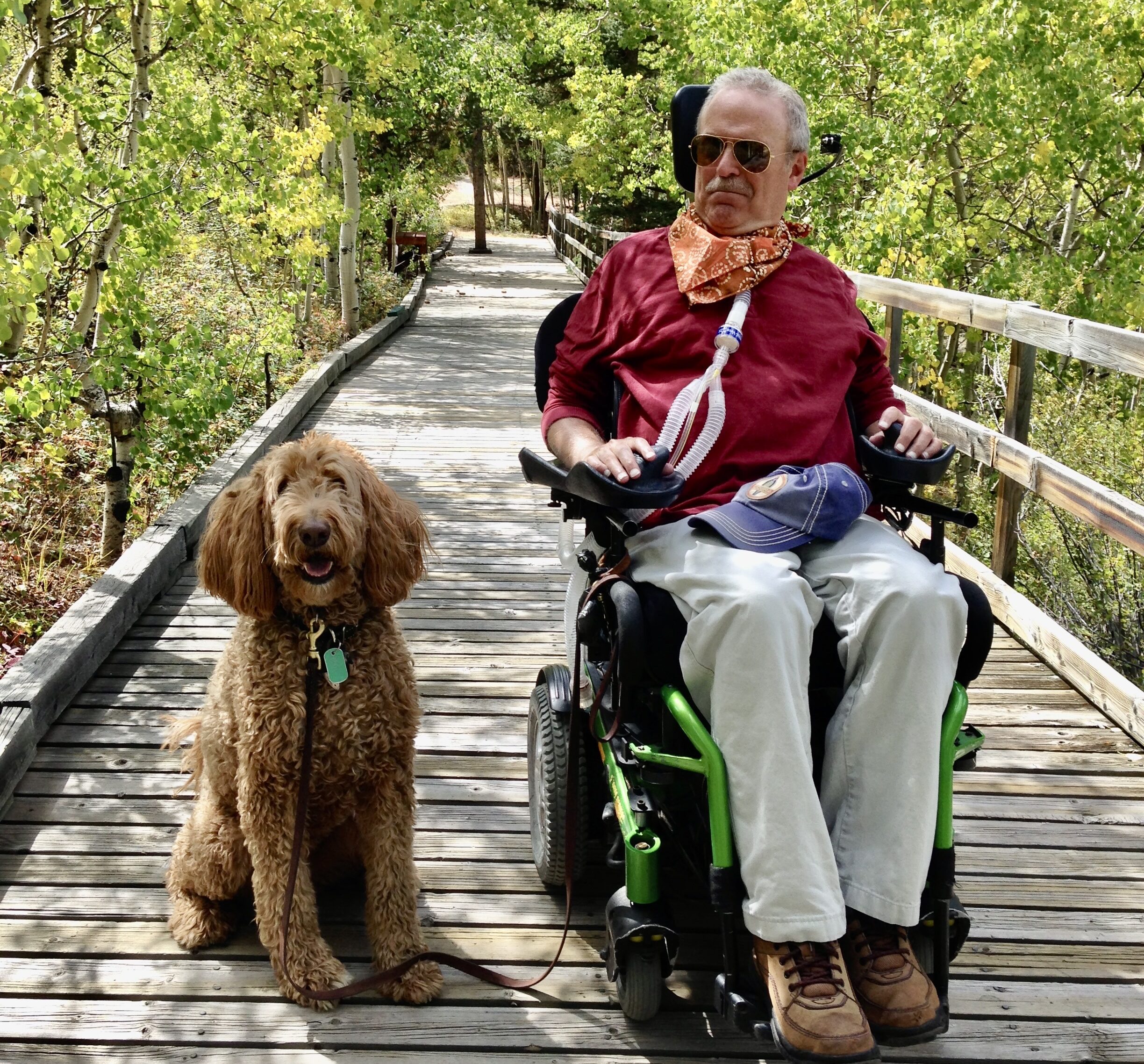 Robin Bolduc isn’t the type of person who takes “no” for an answer — particularly when it comes to fixing her husband’s wheelchair.

Her husband, Bruce Goguen, 69, is paralyzed from multiple sclerosis. And without his chair, he would be stuck in bed, at risk of developing pneumonia or pressure sores that could lead to sepsis and death.

When components of the chair wear out or break down, the road to repair is littered with obstacles. Recently, the Broomfield, Colorado, residents had to replace a button that Goguen presses with his head to control his wheelchair. They considered going through his wheelchair supplier for the repairs.

“If we did that, he would literally be in bed for months,” said Bolduc, who, along with her husband, is a member of the Colorado Cross-Disability Coalition, an advocacy group. “There’s a quality-of-life issue — he could be lying in bed staring at the ceiling. He has no movement without his wheelchair.” 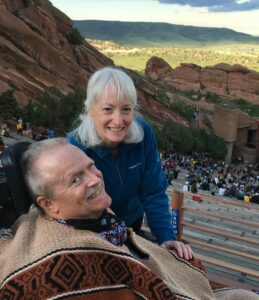 Robin Bolduc of Broomfield, Colorado, says she isn’t the type of person who takes “no” for an answer when it comes to fixing her husband’s wheelchair. Her husband, Bruce Goguen is paralyzed from multiple sclerosis. (The Bolduc-Goguen family)

But, instead, Bolduc tracked down the manufacturer, ordered several buttons online for $20 each, and discovered that replacing the part herself was simple.

“It’s a plug,” she explained. “It’s like charging your cellphone.”

The multibillion-dollar power-wheelchair market is dominated by two national suppliers, Numotion and National Seating and Mobility. Both are owned by private equity firms that seek to increase profits and cut spending. One way they do that is by limiting what they spend on technicians and repairs, which, when combined with insurance and regulatory obstacles, frustrates wheelchair users seeking timely fixes.

The $70 billion durable medical equipment market has been an attractive target for private equity investment because of the aging U.S. population, the increasing prevalence of chronic conditions, and a growing preference for older adults to be treated at home, according to the investment banking firm Provident Healthcare Partners. Medicare’s use of competitive bidding favors large companies that can achieve economies of scale in manufacturing and administrative costs, often at the price of quality and customer service.

Regulations set by Medicare and adopted by most Medicaid and commercial health plans have led to lower-quality products, no coverage for preventive maintenance, and enough red tape to bring wheelchairs to a halt. 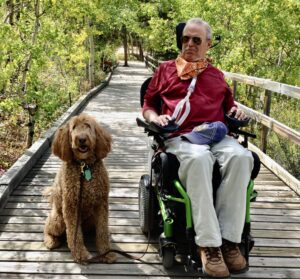 Without his wheelchair, Bruce Goguen would be stuck in bed. But going through his wheelchair supplier to get broken or worn-out parts repaired can take weeks or even months. (Robin Bolduc)

Power wheelchair users have long been fighting for the right to repair their wheelchairs themselves or through independent repair shops. Medicare and most insurance companies will replace complex wheelchairs only every five years. The wheelchair suppliers that have contracts with public and private health insurance plans restrict access to parts, tools, and service manuals. They usually keep a limited inventory of parts on hand and wait until health plans approve repair claims before ordering parts.

Some chairs require a software passcode or a physical key for any repairs. Wheelchair users who make fixes themselves may void their warranty or lose out on insurance payments for repairs.

“What bothers me is that the wheelchair company, knowing that the buttons wear out, won’t keep any in stock,” Bolduc said. “They’ll risk my husband’s life, but they won’t risk $20 to buy a button and not get reimbursed for it.”

That could soon change. The Colorado legislature has passed a first-in-the-nation right-to-repair bill for power wheelchairs that will allow owners and independent repair shops to access parts, embedded software, tools, and documentation needed to perform diagnostic, maintenance, or repair services. Colorado Gov. Jared Polis is expected to sign the bill into law this month.

The right-to-repair bill may help, said Mark Schmeler, an associate professor of rehabilitation science and technology at the University of Pittsburgh, but it’s not a perfect solution. “There is a serious problem with wheelchair repairs, and the consumers are basically crying out for help,” he said.

Part of the problem, Schmeler said, is a Medicare decision not to cover preventive maintenance for power wheelchairs. Many wheelchair users are unfamiliar with or unable to do routine maintenance such as tightening the bolts or cleaning the casters. As a result, problems aren’t addressed until something breaks down, often leaving the user stranded.

Additionally, Medicare officials have interpreted the statute establishing payment for durable medical equipment to cover wheelchairs only for in-home use. Consequently, many power wheelchairs aren’t designed for outdoor use and are prone to failures when users take them outside. “It’s like you’re outside walking around all day with your slippers on,” Schmeler said.

When Medicare adopted competitive bidding for durable medical equipment in 2011, it allowed large companies to undercut the pricing of smaller, local wheelchair shops. Numotion and National Seating and Mobility bought out many smaller companies and now dominate the market.

Competitive bidding encourages suppliers to press manufacturers for lower-cost wheelchairs, which spurs manufacturers to use lower-quality parts. More than 1 in 4 repairs result in users being stranded, missing a medical appointment, or missing work, according to a study published in 2016 in the journal Archives of Physical Medicine and Rehabilitation.

Wheelchair suppliers make most of their money by selling the wheelchair and tend to lose money on repairs. So there is little incentive to hire more technicians or pay for training.

Suppliers testified against the Colorado bill. “The problem with this legislation is that it does not provide a good solution to address the problems responsible for the delays,” said Seth Johnson, senior vice president of government affairs for Pride Mobility Products, a Duryea, Pennsylvania-based supplier of power wheelchairs. If repairs are done incorrectly, he said, patient safety could be jeopardized.

Medicare regulations add to the problems, with low reimbursements, and Medicare pays only for parts and labor, not for technicians’ travel time. Another cause for delays: Medicare sometimes requires physicians to document that an individual still needs a wheelchair and that it needs to be repaired.

Kenny Maestas of Lamar, Colorado, has been in a wheelchair since his spine was severed during a rollover vehicle accident in 1987. His wheelchair supplier, located more than 150 miles away, won’t schedule a repair visit unless it has another client nearby that needs a repair. When his battery begins to die and won’t hold a charge, he becomes tethered to an outlet, unable to leave his home for more than 20 to 30 minutes at a time until the supplier replaces the battery.

Julie Jennings, 56, of Denver, was diagnosed with multiple sclerosis in 1995 and now can’t walk.

She described a lengthy ordeal to get even a simple wheelchair fix — the supplier waited for insurance to approve the repair before ordering the parts. The last time she needed a repair visit — to replace the battery, armrests, and a joystick controller — the entire process took three months.

“I try to be proactive, and I try to keep an eye on the wear and tear,” she said.

The right to repair could help reduce the kind of delays that Maestas and Jennings have experienced by allowing users to purchase the parts and repair the wheelchairs themselves or to call in independent repair shops.

Consumer advocates with the Colorado Public Interest Research Group said the power-wheelchair industry is the first sector required to provide repair access since Massachusetts voters approved a right-to-repair measure for cars through a 2012 ballot initiative.

Car manufacturers decided they didn’t want to fight that battle in all 50 states and opted to apply the same standard across the country.

Don Clayback, executive director of the National Coalition for Assistive and Rehab Technology, an industry group representing wheelchair suppliers, said whether the industry would change its policies nationwide was unclear. “We would expect changes will be limited to Colorado,” he said.

Last year, President Joe Biden issued an executive order that directed the Federal Trade Commission to draft regulations that limit manufacturers’ ability to restrict independent repairs of their products. At least three right-to-repair bills have been introduced in Congress this year. Massachusetts and Pennsylvania are also considering bills that address wheelchair repairs.

For now, Bolduc is prepared to go to any length to get her husband’s chair repaired. Once, she took away an uncooperative technician’s keys until he fixed the wheelchair. She then returned his keys and gave him a big candy bar to smooth things over.

“They’ll turn me into this crazy woman because my husband’s life is on the line,” she said. “If I have to kidnap somebody to get his chair fixed, I’ll do it.”