I was placed on dialysis when I was 30 years old. Before my diagnosis of end-stage renal disease (ESRD) or kidney failure, I had been an active, adventurous world traveler. I spent time in the Middle East, first in the Army, then later as a civilian defense contractor. When I finally rotated back to Kansas City, I got a job with a security company and starting fielding new opportunities that could send me around the world again.

It was around that time that I began to experience some health issues. I was rapidly gaining weight and performing even the simplest tasks would wipe me out. One night after work I decided to stop by an emergency room and get checked out. After the nurse drew blood, the doctor came in to talk to me about the results of the labs. The look on his face told me something was wrong.

The doctor explained to me that I had ESRD and needed dialysis immediately. I received a central venous catheter, and someone came to tell me what the next few years would look like. A nurse gave me a small pamphlet with a basic outline of what dialysis was and, after a brief discussion, left the room. That was the extent of the education I got before being pushed through the healthcare pipeline.

I was discharged from the hospital a few days later, feeling numb and not really sure where to go from there. Before I left the hospital, I got an appointment for my first dialysis treatment. 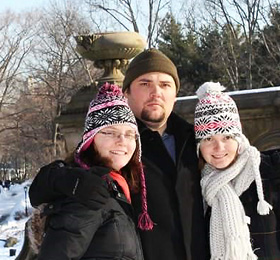 I was no stranger to dialysis; my mother had been on it since I was 19. I had seen the physical effects of ESRD, so I had no problem understanding the seriousness of what was going on. But the idea of dialysis terrified me, and I needed some time to myself to think about a few things. Did I even want to do dialysis? How soon could I get a transplant? Was I willing to accept the risks that transplants pose? If I couldn’t get a transplant, would I want to continue dialysis? If so, for how long?

I began with the most basic question: Why am I on dialysis in the first place? How can an active 30-year-old man end up here? You would think the answer would be easy to find out. After all, the doctors had done numerous tests, biopsies and lab work. It seemed like a pretty straightforward question.

After months of asking nurses and doctors how ESRD happened to me, I got no satisfactory response, so I gave up asking. The dialysis center staff told me that they were not concerned with why I was on dialysis, only that the dialysis was working. Not concerned! That comment really hurt. What about the patient? Why am I not entitled to know what is happening to my body? Why must I be the last one to know or the only one to care?

It wasn’t until a year later, when I was being evaluated for a transplant, that I was able to see the results of the biopsy. I had a condition called focal segmental glomerulosclerosis (FSGS), a rare disease that can lead to permanent kidney damage. I also found out that I had one of the most aggressive variants of FSGS, which made the chances of its recurrence in a new kidney significantly higher.

At that point, I felt that the only way I was going to take control of my treatment was to learn about it on my own. I had never worked in the medical field and had only basic knowledge of biology and anatomy, so doing research was a challenge. Not only was I learning something as complex as how a kidney functions, I was also learning the language of the medical community. I became student of Google University and was now majoring in FSGS and the kidney.

I spent hours struggling to comprehend research papers in medical journals, reading articles and talking to people in support groups I found online. I slowly began to put the pieces together. My questions to my doctors became more specific and probing, and I finally felt like I was getting the answers I was looking for.

Meanwhile, I began to settle into a routine and gradually got comfortable with being on dialysis. In the beginning, I continued to work full time and hold on to what I considered a “normal” life. My days became long and exhausting. My mornings began at 5 a.m. After leaving the dialysis center around 10 a.m., I usually had a few hours to myself at home before working an eight-hour shift. Home dialysis was something else I had to discover on my own. I eventually transitioned to peritoneal dialysis, which is something you can do at home while you sleep, which allowed a little more flexibility with schedules.

It was a little easier to be on home dialysis, but still a challenge. I did that for about a year and a half. I was tired from my rigorous schedule, and the effects of dialysis were starting to manifest. I was hospitalized a few times, mostly from infections, which caused me to miss work and began to reflect poorly on my regular reviews from supervisors.

I eventually quit my job and applied for Social Security disability. I hated doing that because I began to feel like my life was being dictated by my disease. I also felt a loss of independence. I was now relying on my family’s support for a place to live, groceries, etc. I felt completely useless. While most people my age were married or in committed relationships, beginning careers and enjoying life, I was at home by myself spending most of my days watching TV and not feeling productive.

I eventually found a part-time job with a medical transportation company and remained working there until I received a transplant in April 2016.

I’ve been asked what healthcare professionals can learn from my experience. First, patients need credible information in order to make decisions about how to manage and treat their diseases. I spent too much time asking for more information—and not getting it—which left me to figure out what was wrong with my body.

Second, it’s important for doctors and nurses to look at patients as people, rather than just focusing on the parts that aren’t working anymore. My kidneys are attached to a body and mind that constitute my life, one that needs to be lived, with obligations, responsibilities, relationships and ambitions. I felt that too often the healthcare system dictated how my disease would manage me, rather than the other way around.

Finally, as knowledgeable as my doctors and nurses are, they can never understand precisely what I am going through. While they can outline the broad strokes of how to manage ESRD, I needed the experiences of patients like me to fill in the gaps, to answer the million little questions about how to live a productive life with this medical condition. For example, how to properly apply for Social Security disability, tips on diet and nutrition, and support for when I’m frustrated with my progress.

I’ve taken my experience into a new career. Today, I work as a patient mentor, helping to engage with and educate patients with late-stage chronic kidney disease and ESRD. I was hired to provide advice, guidance and assistance to new patients as they begin their journey on dialysis. This job gives me a purpose and fulfillment that I have been lacking for years. I like knowing that my experience will help someone else on this journey and will have a better understanding of why this is happening to them.

In a healthcare system that sometimes makes you feel like a cog in a vast machine, patients need to be their own best advocates. At the same time, doctors and nurses need to realize that patient advocates are not born, they’re made. I believe that by approaching a patient as a whole person, with a life that exists beyond the disease, will result in healthcare that is more engaged and brings about better outcomes.