It was the first time the young woman had come to the health center in a suburb just north of Chicago. When the 26-year-old walked into the exam room back in 2008, there was no paper chart or electronic health record (EHR) accompanying her, no background information, nothing to indicate anything but a routine annual gynecological exam.

She and her husband were about to try to have their first baby, she told Valerie Gruss, a veteran advanced practice registered nurse at the primary care clinic. Dr. Gruss is a Ph.D. who spends most of her time as a University of Illinois at Chicago researcher and teacher, but she’s also a veteran practicing clinician. When she sees patients, she tries to establish a personal connection with each.

Gruss spoke directly to the woman. “I noticed that you have an accent. Can you tell me where you’re from?”

The story emerged in a matter-of-fact tone, even if the facts were unusually sad. The woman had grown up on a farm north of Kiev in the Ukraine, living with her mother and grandfather. But then her grandfather had gotten sick with cancer – leukemia – and died. She and her mother immigrated to the United States, but, after a few years, her mother had also been diagnosed with cancer – thyroid cancer – and died.

Not Far from Chernobyl 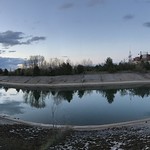 Other clinicians might have nodded in sympathy, expressed their condolences and then moved on to happier topics, such as beginning a new family, or routine clinical ones. Gruss persisted. But the farm, it turned out, was not far from Chernobyl. Out of nowhere, a nuclear accident had entered the exam room.

The explosion and reactor meltdown that disabled the infamous nuclear power plant in April 1986, released unprecedented amounts of radiation. The family farm was not evacuated, and the family continued to harvest the crops and consume them amid government reassurances that the situation was being “monitored.”

None of the woman’s previous providers had ever asked where she came from, and none had ever told her about radiation exposure increasing the risk of thyroid cancer and leukemia or of a particular eye disease. Instead, said Gruss, they’d “checked off all the boxes” – no allergies, immunizations up to date – “but never took a moment to say, ‘Gee, could you tell me about yourself?’”

The annual exam found nothing abnormal, but Gruss knew that she and the patient had to work together to ensure she didn’t subsequently fall through the cracks. Task number one: “How do you find guidelines for caring for a survivor of a nuclear radiation leak?” Eventually, Gruss found ophthalmologist, endocrinologist and geneticist colleagues who would continue to follow the patient, mindful of the long-term effects of radiation exposure.

Gruss told this story as part of the 2019 Human Factors Engineering Society Health Conference in Chicago, in a session on clinicians engaging patients as partners in safety. Perhaps this is a safety story, in the sense of preventing a missed diagnosis. However, the broader lesson is surely the critical importance to good care of understanding the contextual factors in every patient’s life.

Sir William Osler, one of the founding physicians of the Johns Hopkins Hospital and medical school, famously said, “The good physician treats the disease; the great physician treats the patient who has the disease.”  To help her colleagues be “great physicians” (and nurses) in the age of the EHR, Gruss goes outside the click boxes. She types in personal information about the patient in the diagnostic section of the record that she knows clinicians are likely to read before the exam.

“To get a full picture of this person, you have to know this,” is the way Gruss describes what she puts down.

Coincidentally, three new books about the Chernobyl disaster were reviewed in The Economist about the same time that Gruss gave her presentation, One is by a Harvard historian, Serhii Plokhy, who grew up about 300 miles southeast of the facility and developed an inflamed thyroid, which he attributes to radiation exposure. A second book, by Kate Brown, describes how radiation entered the food supply.

“Tell me how you got here today?” Gruss asks her patients, who are often older, as a way of assessing cognitive function, ambulatory ability and such social factors as transportation availability. When Gruss described the health center attracting both elderly Jewish Holocaust survivors and elderly Japanese-Americans who’d survived America’s World War II internment camps, it gave me goose bumps.

Amid all the jargon about engagement, social determinants and patient-centered care, “Tell me how you got here today?” may be the simplest and most important question of all.

Editor’s Note: This post was first published in April 2019.