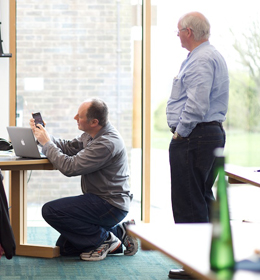 An Irish software expert who’d been helping companies sell on eBay walks into a room with a Slovenian inventor who’d built a world-class company in the “accelerator beam diagnostics market.” (Don’t ask.) What they share is not just foreign birth, but “immigration” to health care from other fields. Both have come to the MedCity Invest conference in Chicago seeking funding for start-ups focused on patient engagement. They’re not alone in their “immigrant” status, and their experience holds some important lessons.

Eamonn Costello, chief executive officer of patientMpower, works out of a rehabbed brick building in Dublin next to the famed Guinness brewery at St. James Gate.  An electronic engineer who’s worked at companies like Tellabs, Costello became interested in healthcare in 2012 when his father was in and out of the hospital with pancreatic cancer. What struck him was the lack of any monitoring on how patients fared between doctor appointments or hospitalizations.

When in 2014 a friend working in healthcare approached him, they looked at building an app for different illnesses. They eventually settled on enabling idiopathic pulmonary fibrosis (IPF) patients to better manage their disease by charting their symptoms and even sending data directly from connected devices to a patientMpower database.

That strategy, however, did not spring to life full-blown. Instead, “we started working with patient support groups, initially in Ireland, then the U.K. and U.S. to help ideate, develop and iterate our solutions,” Costello wrote in an email follow-up to our conversation. One constant was patients’ desire to “feel in control of their own condition” between doctor visits.

Those relationships with patients continue, Costello added, “with lots of testimonials on our Facebook page.”

Meanwhile, as a winner of the IPF Catalyst Challenge,the company received enough new cash to add a lung cancer app to its IPF one. It plans to develop deep learning analytics to provide insights into IPF.

Ursic, meanwhile, moved to sunny La Jolla, California after building a company in his native Slovenia that capitalized on his own inventions, most notably a “method for detecting position and arrival time of accelerated particles” at linear accelerators such as CERN. An electrical engineer who later attended both Wharton and the executive program at MIT’s Sloan School of Management, Ursic teamed with another experienced technology entrepreneur in 2014 to build what in 2017 became Cella Medical.

Driven by the belief they could produce a technological breakthrough, their goal was to produce an affordable, portable and clinically proven device that consumers could use in connection with a smartphone app in order to perform bioimpedance spectroscopy (BIS) measurements.

As Cella’s website helpfully explains, “BIS is the process of measuring the conductivity of [the intracellular and extracellular water in] your body over a wide frequency range and using sophisticated mathematical modeling…to accurately and routinely measure hydration and body composition.”

To put that a little more simply (which the website eventually does), athletes can use Cella data to fine-tune their training and build lean muscle mass to a degree previously not available. More intriguingly, accurately monitoring the body’s hydration status through BIS may detect changes in hypertension earlier than current methods, according to recent research, and may also help determine patient prognosis in those with acute heart failure.

The name “Cella” refers to the inner, hidden area of an ancient temple, analogous to the way intracellular water has been hidden from extracellular water. Although the company is still seeking funding, Ursic, its CEO, hopes that bringing intracellular measurement to the consumer market will be disruptive in the same way in which “personal computers cannibalized mainframes and mini-computers.”

Whether at MedCity Invest, Health 2.0 or the many other health technology meetings, Costello and Ursic are far from the only entrepreneurs who have foreign roots, are new to healthcare and whose passion is giving individuals more control.  A “pitch session” on healthcare services with 7 companies included two entrepreneurs who fit that definition: Carita Savin, co-founder and CEO of the Finnish firm Huoleti, seeking to launch in this country its platform enabling a peer support network for those with severe illness; and Kellogg Business School student Diana He, whose Sit the Moon Health platform to provide “individualized wellness and leadership coaching for millennial women” was inspired by a Chinese custom of giving support to new moms.

Digital health is not only unconstrained by national boundaries. It also allows ordinary individuals who’ve been frustrated by the way the current system treats them and their loved ones to go outside that system and invent new processes to replace the old, failed ones.

Just as past immigrants built new institutions in the New World, these digital health immigrants from outside the traditional system – sometimes coming here to live, sometimes being here virtually – promise to broaden, enrich and improve the lives of those in their communities.