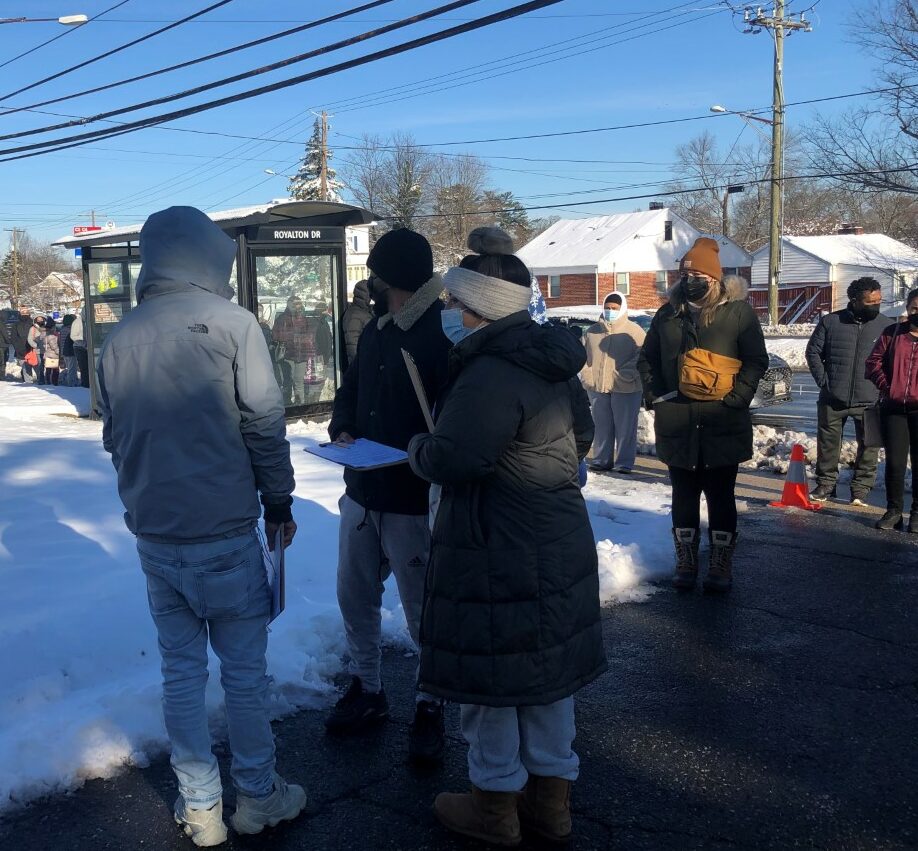 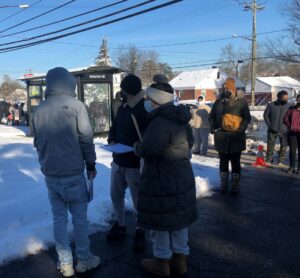 About 200 people turned out on a cold January morning to get tested for covid-19 at Mary’s Center, a health clinic in Silver Spring, Maryland. Many of the clinic’s patients are Hispanic, and a cultural belief in the importance of watching out for others may have helped drive them to get tested as the omicron variant surged, says Marvin Ruiz-Chávez, who manages covid testing and vaccination at the Silver Spring site. (Sarah True for KHN)

On a snowy January morning, Luis Portillo stood in line on the side of a busy road in Silver Spring, Maryland — a suburb just north of Washington, D.C. — with about 200 other people, waiting for his turn to get tested for covid-19 at Mary’s Center, a federally qualified health center. Portillo, a 65-year-old bakery worker originally from El Salvador, jammed his hands in his coat pockets and shivered in the 25-degree weather.

Though Portillo is not particularly concerned about covid — he is vaccinated and boosted and had a mild case last year — he came out because it’s necessary to “look after yourself as much as you can” to prevent infecting others who may be more vulnerable, he said in Spanish. After he developed symptoms following a holiday party and found out another partygoer had tested positive, Portillo decided he needed a test. He was concerned about exposing co-workers or his four housemates, who have remained symptom-free.

Similarly, Andres Bueno, 40, a Colombian construction worker standing in line, said he and many others are now “a little more confident because we know more about the virus,” but still “worry about affecting other people. I think that is more what worries you,” he said in Spanish. Bueno, who is vaccinated and intends to get a booster shot, was also in contact with someone who tested positive.

The rush for testing at Mary’s Center reflected some of the unique needs of its large population of Hispanic patients, many of whom work in public-facing jobs without paid sick leave or live in multi-generational households with elders at higher risk for severe disease.

It also pointed to a broad sense of collectivism, or belief in the importance of watching out for others in the community, which public health experts have noted helps drive health behaviors among some groups of Latino immigrants. That attitude may have helped motivate these patients to get tested, said Marvin Ruiz-Chávez, who manages covid testing and vaccination at the Silver Spring site.

Concerns about the community — bolstered by strong outreach efforts — also likely played a role in the increase in vaccination rates for Hispanics in recent months, which are now equal to those of non-Hispanic whites in the U.S. Sixty percent of each group have received at least one dose.

Three-quarters of patients at Mary’s Center, which has five clinic locations and several school-based health centers in the Washington metropolitan area, are Hispanic, and 65% earn less than the federal poverty level, according to data from the federal Health Resources and Services Administration, the agency that oversees federally qualified health centers. When the omicron variant took hold, demand for testing at the center skyrocketed.

For many of those waiting for hours in testing lines last month, Mary’s Center offers safe and comfortable access to care. Many of its patients are undocumented, have limited English skills, and lack health insurance, which largely excludes them from the mainstream health care system. However, Mary’s Center staffers are bilingual Spanish speakers, patients can get tested free of charge with minimal red tape, and patients are not required to provide information about their citizenship status.

Before the omicron surge, the Silver Spring site tested an average of 70 people a day, said Ruiz-Chávez. By mid-December, hundreds were showing up, forcing the center to cap daily testing at about 200 people due to limited supplies, personnel, and time.

Testing sites around the country serving a wide variety of groups saw similar increases in volume as covid cases soared. Still, Ruiz-Chávez cited a common cultural emphasis on living in harmony with others — called convivir in Spanish — as a key motivator for Latino test seekers, many of whom mentioned the need to take care of their own health to protect others from the virus.

Honduran immigrant Carla Velazquez, 27, echoed this sense of responsibility: “We don’t want to be carriers,” she said in Spanish, while standing in line wrapped in a large blanket. Velazquez and her husband, who had both been vaccinated, were exposed to a relative with covid and felt obligated to protect others who attend their church or gather in other shared spaces.

The gap in vaccination rates began to close in earnest over the summer, which has largely been attributed to the Biden administration’s efforts to step up vaccination access in underserved communities, and the local, boots-on-the-ground outreach work done by culturally credible local organizations and facilitated by federal dollars.

Undoubtedly, access has strongly impacted vaccine uptake in the Hispanic community, especially among immigrants, said Sandra Echeverría, an associate professor in public health education at the University of North Carolina-Greensboro, due to wide-ranging social disadvantages including language barriers, lack of familiarity with the health care system, inability to get time off work, and fear of immigration enforcement.

But how much has the collectivism that’s embedded in Hispanic culture — particularly among immigrants and their families — also contributed to closing the vaccination gap, and driving people to get tested? “There might be a link there, we just don’t know” due to lack of data and the difficulty in measuring a hard-to-define concept, said Frank Penedo, a professor of psychology and medicine at the University of Miami.

“I think the access was key, and so let’s not forget that,” said Echeverría, “but that cultural orientation also, the sense of community, doing for yourself and others, does exist,” and undoubtedly plays a role.

This story was first published by Kaiser Health news on February 14, 2022.