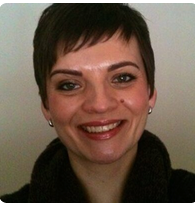 We have watched our sister, Chrissie Blackburn, become an amazing mother, patient advocate and inspiration to many. Since the birth of her daughter in 2007, Chrissie has been relentless as an involved parent, advocating for her daughter who requires the care of many specialists. Chrissie recognized that many other parents did not know how to advocate for their child, know what to ask, or even that they should ask to be more involved in their child’s care. She made it her mission to help other parents become informed, involved and activated in their children’s care.

When Chrissie moved back home to Cleveland with her former Marine husband, Charles, and daughter, Lily, they became parents at Rainbow Babies and Children Hospital where Lily received both routine and special care. Chrissie made it her business to get to know all of Lily’s physicians and nurses , and then sought out how she could help other parents. In 2011, she began serving as a parent volunteer on Rainbow Babies and Children’s Hospital Patient and Family Advisory Council (PFAC). Her commitment and leadership were soon recognized by hospital staff and other parents on the PFAC, as she was elected vice president in 2012 and president in 2013. As noted in results below, through communication, collaboration and inspiration, she transformed this council with necessary changes. During this same time period, Chrissie became involved in the National Partnership for Patients campaign, connecting the Weber Shandwick staff who oversee the National Patient and Family Engagement network. She became an active member of this network, frequently participating on national webinars and invited to present at several face-to-face meeting in Washington D.C. Again, her communication style, openness to collaboration and commitment to transformation was recognized by many, leading her to invitation to participate on several other local, state and national initiatives. These additional activities include:

While serving as a volunteer in 2012 and 2013 Chrissie also came to appreciate even more so that many parents did not know how to be involved in their children’s care, nor did healthcare professionals necessarily know how to encourage involvement of parents. To address this gap, Chrissie developed and defined the ETeam®, a framework designed to engage and empower patients and families in their care:

Chrissie shared her idea with hospital staff and has since collaborated to develop a full curriculum and peripheral materials to make the ETeam an actionable framework.

During the past two years her volunteerism, innovation, communication and collaboration with many have transformed the health system she is a part of and have inspired many. All who meet Chrissie and hear her speak witness her passion and commitment to bringing patients and families into care at the bedside as well as into health care organizations’ activities.

Results of her several commitments include:

Chrissie has become a recognized PFE leader at her own health care system, statewide and nationally. We have watched and listened from Colorado-inspired by our little sister’s gumption and passion, and so proud of all that she has taken on, as she continues to care for her daughter and help other patients, parents and family members become active participants in health care.