Emotions are messy. No one taught me about that in medical school; I thought only psychiatrists had to deal with emotions. I was going to be an internist; I’d only have to deal with emotions if something really bad happened. Not that anyone taught me how to cope with the really bad stuff. In my first month of residency, I was dispatched to tell a family that their mother was not going to survive her stroke. I had never seen anyone have that conversation, and I had no idea how to start. “See one, do one, teach one” didn’t apply to communication; we just had to “do one” on our own. I was terrified, and I can only imagine how the patient’s family felt.

When I joined the American Academy on Communication in Healthcare, I finally learned how to approach that “bad news” conversation with skill instead of fear – what a relief! Communication is a skill; talking to patients is a procedure, and we can define it and practice it and get better at it, just like any other procedure. Amazingly enough, we can even get better at the most difficult conversations. We can break the bad news compassionately and even save ourselves some time in the process. It turns out that improving communication skills make us better and more efficient. Win/win.

Emotions will be there no matter what. We can’t avoid them. Our patients don’t stop feeling just because they step into our examining room. When I’m upset, I want someone to acknowledge what I’m feeling. Our patients, it seems, often need the same thing. Ignoring their emotional distress makes everything else harder. Anxious or angry people can’t retain the information we offer. We may explain things brilliantly and at the next visit discover that the perfect plan we created didn’t happen. We have to start all over again. This is a recipe for frustration.

Bad news? It all depends.

We think we know when we’re headed into a “bad news” conversation—the biopsy report that says it’s cancer, or the abnormal mammogram, or the elevated PSA. It took me a while to figure out that information I thought was routine could be very bad news for the patient.

Mark was 45 when he had blood tests done at work for an insurance policy. He brought the report to me at his next visit, and showed me where the blood sugar was highlighted. “Do I have diabetes?” I explained that we’d have to do some additional testing, and then I said, “You seem really worried.” He took a deep breath. “Well, yeah. My dad has diabetes, and he’s on dialysis. I guess I am worried.” Of course he was worried. For Mark, this wasn’t just an abnormal blood test – this was a harbinger of something terrible in his future. When the repeat blood work confirmed the diagnosis, I was able to address that directly and explain that we could protect his kidneys with careful treatment. I suspect he was a lot more motivated to take his medication and watch his diet because he knew that he was working to keep himself off dialysis. 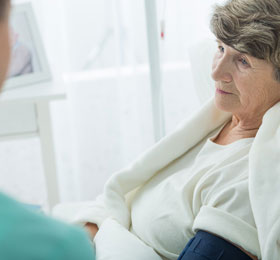 Work on partnering with patients through difficult times; it’s often when they need physicians the most.

People come into our care with all kinds of ideas we don’t know about – fears of complications like Mark’s, and theories about their own health. They often have very specific ideas about what they need, which may not match our plan. I have read the literature; I know that most people with back pain have musculoskeletal problems that do not require surgery, and I know that MRI scans of the back can be misleading. Sure, they’re expensive, but that’s not the worst of it; they’re also bad care. But every football player with a twinge in his lumbar spine has an MRI, and our patients have come to expect the same thing. They are prepared to advocate for themselves and sometimes see us standing in their way. After years of training and diligent attention to the literature, we are frustrated and demoralized when our patients trust Google and ESPN more than they trust us. It’s infuriating. It’s tempting to reel off the evidence, but that’s unlikely to convince the patient. We need to build a relationship; they need to know that we are on their side.

Margaret came in to see me with back pain, but she didn’t present that as her chief complaint. When I asked what brought her in to the office, she said “I need an MRI.” I had to probe a little to discover what prompted that request. Once I’d examined her, I knew we were in for a rough time, because she didn’t need an MRI. That’s another kind of bad news. I started off by reflecting back what I’d heard her say. “You’re having a lot of pain, and it’s keeping you from running and starting to interfere with your work. You’re worried that you have a ‘slipped disc’ and so you’ve asked for an MRI.” I went on to emphasize my desire to partner with her. “I really want to work with you and I think there’s a lot we can do to improve your pain.” And I acknowledged that I was giving her bad news: “I afraid I have some news that might be hard to hear. I don’t think you need an MRI.”

I expected her to be angry, and she was. “You’re just trying to save the insurance company money. Do they pay you more if you say, ‘No’?” That hit me where it hurts. Now I was angry. Slanging back and forth wasn’t going to get me anywhere; it might be temporarily satisfying, but it wouldn’t solve the problem. I knew I couldn’t avoid the emotion, though. “You feel really strongly about this. It’s important to get that MRI.”

Margaret said, “I know I need an MRI to check out my discs.”

I was really tempted to snap, “Well, I know better than you do because I’m the doctor.” I did a lot of deep breathing during that visit. I decided to blame the NFL. “Lots of people want an MRI for their back, and with all the football players getting MRIs every time they turn around, I can understand why. MRIs are crucial for people who need back surgery. Do you think you need surgery? ”

“I sure hope not. Do you think I need an operation?”

“No, I don’t. I didn’t find any evidence of nerve damage when I examined you. You have a lot of muscle spasm, and I think that’s causing most of your pain. The MRI won’t tell us anything about that, and it wouldn’t change the treatment I’m going to suggest.”

She wasn’t entirely happy, but she was willing to try my plan and at least delay the MRI. I felt better about the plan than if I’d caved and ordered the test, although I was still irritated and I had to walk around a little before I went in to see the next patient. More deep breathing.

Emotions are messy. Our patients bring their emotions into our encounters, and we bring our own emotions with us everywhere we go. Once I learned to address emotion instead of trying to duck it, the difficult conversations seemed manageable and, often, rewarding. Those messy moments are the times when our patients need us the most.